The Freshman Class on Cooking Channel filmed at LCI in Baton Rouge! 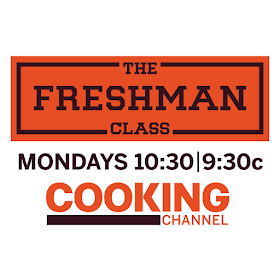 From January through April, a camera crew from the Cooking Channel followed four freshman at the Louisiana Culinary Institute in Baton Rouge during  their first semester of culinary school.  The show will premiere this upcoming Monday, June 10th, at 9:30 PM CT.  I'm excited about watching the show, and if you keep watching throughout the season, you might see me a few times too!  The camera crew filmed me chatting with one of the students at Highland Coffees, recording the Bite and Booze Radio Show with a couple of the students, emceeing the Louisiana Feast of Fields, and eating beignets!  Hopefully I'll make the final cut at least once.  Set your DVRs now for:

Episode 1 titled "Meet the Freshmen" will introduce us to these real first semester culinary students:

The new class of incoming students arrives at Louisiana Culinary Institute, where they're drilled in the school's strict policies. They immediately prepare for a make-or-break-it test on sanitary practices.  Meanwhile, Tiffany's husband shocks her with his extreme reaction to her starting school, as Jared wonders whether he should reveal his disabilities from PTSD, and Ben frets about disappointing his family. Jasmine also reveals a surprising secret about her full time job.

About The Freshman Class:

The Freshman Class follows four aspiring chefs from day one of classes at the Louisiana Culinary Institute in Baton Rouge through their final exams at the end of their first semester as they embark on the journey to earn a culinary degree. These students are chasing their dreams all the while taking a big risk - culinary school is expensive, difficult, and offers no guarantees. Follow the journey and get an insider's look into the trials and triumphs of being a culinary student. Produced by Punched In The Head Productions for Cooking Channel.
Share