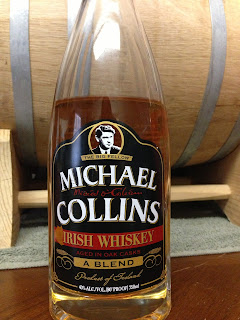 Following up on last week's Paddy Old Irish Whiskey, this week we take a look at Michael Collins Irish Whiskey.  Another whiskey that fits the Irish mold, this blended whiskey certainly offers more flavor and a little more overall complexity.  Michael Collins gives off syrupy sweet aroma with notes of honeysuckle and some nostril tingling booze.  On the tongue it retains its sweetness with caramel and vanilla matched by some oaky bitterness on the back end.  There's a little spice and some subtle floral tones.  It finishes smooth in typical Irish fashion.  By no means is Michael Collins complex compared to a good bourbon or Scotch, but the balance is nice and has some different flavors that it is working with.  It won't knock any socks off, but the whiskey is light and drinkable with a subtle sweetness that is nice.


Whisk(e)y Wednesday is a blog post series on Bite and Booze sponsored by Calandro's Supermarket. Calandro's has one of Baton Rouge's best selections of bourbon, Scotch, Irish, and other whisk(e)ys as well as wine and craft beer. This WW feature was scored by Jay Ducote, Eric Ducote, and Jeremy Spikes. Scores are marked for Nose, Taste, Finish, and Balance and Complexity using our own proprietary scoring system. Marks are then added and averaged, leaving us with a final score out of a 100 point scale. Our scale should be looked at on the full range of 0-100 rather than an academic range where 70 is passing and anything less is failing. A 50 should be considered a very mediocre whisk(e)y while anything below 20 is absolute horse piss and anything above 90 is rather extraordinary.
Share