Friendsgiving is a pot-luck, family-style dining event brought to our group of friends by the organizers of our weekly dinner club, Sara and Rachel. The hosts instructed each attendee to bring at least one dish and a bottle of wine for the festivities. I graciously took the assignment of an appetizer because I felt like it gave me the most flexibility to shy away from traditional Thanksgiving fare and think outside the box a little bit.

I made a Pear and Bourbon Reduction Chutney the day before to pair with some sea scallops and bacon.  My idea was to make bacon wrapped scallops, but that didn't work out so well.  Fortunately, as you'll see, I was able to improvise!  The preparation on this day began with a couple pounds worth of fresh, thickly sliced bacon strips from a local butcher shop. 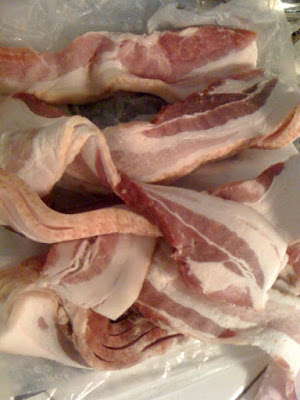 I first boiled the bacon because I wanted it to stay flexible in order for me to wrap it around the scallops.  It turned out that the thick bacon was really too large to properly wrap my smaller-sized scallops, so I abandoned that plan.  I removed the bacon from the water and fried it to a crisp in a cast iron skillet.  Crispy bacon is ways better anyway!

The next part of the appetizer involved me searing some sea scallops.  I cooked the scallops in the same skillet that I used for the bacon, leaving a little of the liquified bacon fat to give them a nice golden brown sear on the outside. 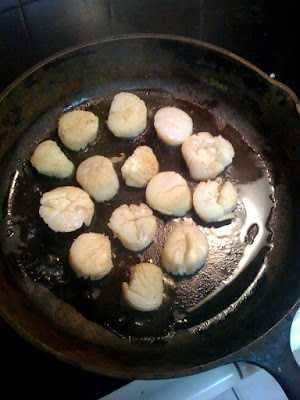 Half of My Scallops Searing in a Cast Iron Skillet

The scallops finished their searing, the bacon remained crispy and warm, and the chutney chilled in the fridge, awaiting the dinner party and Friendsgiving!  Upon arrival at dinner club I set up shop on the table.  The scallops were spread out on a steel chaffing dish.  Each delightful scallop was then topped with the savory, crispy, meaty portion of a thick-cut bacon slice.  Using a spoon, I then placed a portion of pear and bourbon chutney on each strip of bacon to round out the flavors and wrap up the finger food dish. 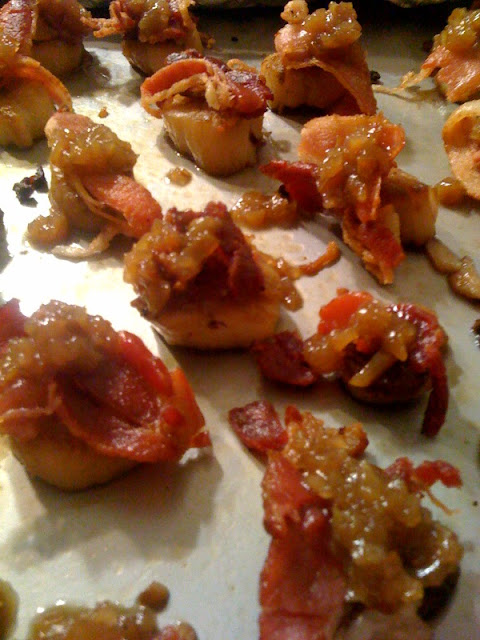 My opinion probably shouldn't count as much because I made the appetizer and in my experience the chef or creator will be the harshest critic of his/her own work. The bacon and chutney stood out to me as being really delicious, but this was the first time I've ever seared scallops and they didn't come out all that great to me. I thought they were okay, but nothing exceptional. I can do better. In all reality, I think if they were a little fresher and would have been eaten when they were hotter off the skillet, everything would have been fine.  Everybody at the party sure seemed to enjoy them though, and that is what really counts!  I got quite a few compliments about the creativity, presentation, and taste of the dish as whole.

If I may take a step back to the drawing board for a second, Chrystal and Amir with The Duo Dishes asked that I incorporate asparagus into the dish when I pitched the idea of scallops and a pear-bourbon sauce.  Thinking that maybe I could spear the scallops with asparagus, I purchased some of the green stalks during my trip to Southside Produce when I bought the pears.  Unfortunately, the scallops were too small and the asparagus was too giant to actually do any spearing, so once again I was forced to improvise. 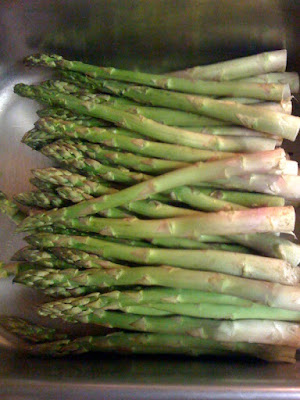 I generously coated the asparagus in olive oil and sprinkled in some Slap Ya Mama white pepper blend since it was my popular seasoning choice of the night.  The asparagus was then covered in foil and placed in a 400 degree oven for a while.  I can't actually tell you how long because I never set a timer or watched a clock.  I base my cooking on judgement, texture, and taste rather than measurement and time.  Good thing I don't try to bake too often!  I checked the vegetables a couple times before I decided the texture was right for consumption, then pulled it out of the oven and brought it over to Friendsgiving along with the scallop, bacon, and chutney appetizer. 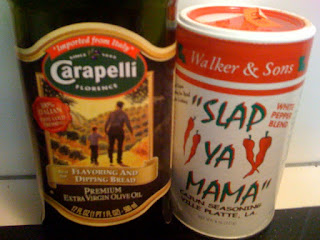 My dishes were ready and so was I!  Friendsgiving had finally arrived.  All that was left to do now was eat, drink, and be merry!  I'll make sure to tell you all about the wine, dinner, and homemade ice cream on the next edition of Bite and Booze!